Bonjour guys ! Since you probably know it, I have created my YouTube channel not a long time ago. In my article « Huge announcement » I explain why I made that choice. Here’s the link to my Channel, go check it : https://www.youtube.com/channel/UCDRdCwGJNGZ0eNPCHFn-suQ
There are thousands of YouTube channels, and I’ve seen many videos (maybe too much haha). There some channels which are not relevant, but this is my humble opinion, and some others which worth the shot.

It’s by watching some Youtubers that I wanted not to be like them, but to offer something as helpful, entertaining and done as passionately as them. There are three main channels which have influenced my choice to create my Youtube channel, and I wanted to talk about them. Since my blog is mostly about fashion, beauty and food, each channel is dedicated to one of this field. If I share those channels with you is not to promote them (they don’t need it anyway, they already are famous), but to share with you where my inspiration is from, and hopefully inspire you too.

I assume that most of you know the magazine which has celebrated its 100 years of existence a few weeks ago. Vogue is my favorite magazine, I hope that one day I will work for one of their editions… Meanwhile, I watch their Youtube channels, mostly the British one, for the specific reason that last year Alexa Chung started the « Breaking into the fashion industry » serie. It worked so well that they did a season 2 about the future of fashion. It’s composed of 8/10 episode of 12/20 min, and it’s passionating.

If you love fashion and care about it, you have to watch those episodes, I’ve learned so many things ! There are interviews of journalists, designers, artistic directors, models… They don’t only talk about clothes, but about the whole industry. How clothes are thought, made, worn, sold… But also how to achieve a career in this world, because yeah there are many of us who want to work in this field, and it’s very hard to stand out of the crowd. 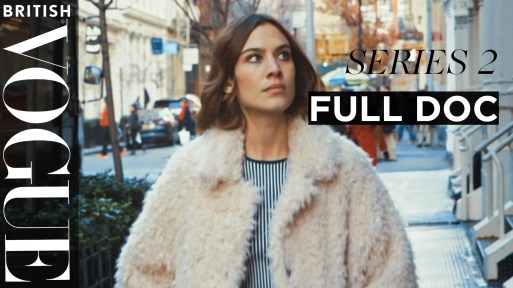 Of course the British Vogue channel talks about many other things, but those 2 specific series are the most interesting content they’ve made in my opinion. Moreover, I like the tone in which it’s filmed, because it’s a serious subject but they smile, laugh, make joke… There are so many prejudices about people who work in the fashion industry ! There are not those superficials, arrogant and ungrateful persons. There are hard workers, inventive and human. There is no miraculous secret to break into the fashion world, but those episodes taught me that no matter what you want to do in your life, be yourself, be passionate and never give up. Someday, somehow, it will pay.

Having a Youtube channel about beauty is what 39827498O72 people have decided to do. Make up videos are ones of the most seen on the web, and to be honest I kind of get bored of them. Some years ago, I found it very instructive because it was new and I didn’t know how to do my make up. So I’ve watched tutorials, and they were very helpful. If I know how to do a smokey eye, it’s thanks to Youtube. But now that I’m at ease with doing my make up, I’ve stopped watching tutos, until one day when I fell on the Lisa Eldridge’s channel.

She’s a make up artist, so I trust her words and make up advices more than those of a teenage girl in her bedroom. She explains very well, she’s done tutorials on Alexa Chung, Rosie Huntington-Whitely and so on. Since make up is her or, she’s the one behind the faces of many cover stars, for exemple she has done the make up of Kate Moss plenty of times. More over, since last year she has become the creative director of Lancôme, but she’s still using and talking about other brands on her channel. She’s transparent and her tutorials are not biased. She’s very involved with her channel, she takes time to make high quality videos, and make up is her life. You don’t have to know her to understand that, just watch one of her videos and you will see that this woman is a really good person.

Last but not least : fewwwd ! As you might know, I am vegetarian. All of the recipes I post on my blog are either vegetarian or vegan. I don’t eat meat because I find the taste disgusting, but mostly because I care about the animal cause ( There are other reasons, but this is not the subject of this article ). I’ve noticed that more and more people are going vegetarian, or at least are asking questions about it. It has also became « trendy » to eat lactose free and gluten free, even if for many of people it’s not a trend but it’s for medical reasons. Anyway, people want to eat differently for their well being, and there is a niche for vegetarian / vegan way of life, which includes food. Some months ago, I don’t know how, but I ended up watching a vegan recipe made on the channel Jenny Mustard, and I loved it. Since that day, I follow all of her videos.

She’s a Swedish woman, currently living in Berlin with her boyfriend, and they both are vegan. Most of their videos are about food, but they also talk about minimalism, clothes… Life in general. I love this channel first because they are funny, second because I love the way the edit their videos ( it’s clean, there are beautiful colors, nice musics…), and third because I love the content. The recipes are not basics, there is research in them, and they prove that being vegan is not as restrictive as most of us might think. They are not starving, I think they eat more than I do haha ! Whether you are vegan or not, watch at least one of the recipes, you will see that with creativity you can achieve amazing things.

I hope that thanks to me you will learn things too, whereas it’s on my blog or my Youtube channel. Yes I write articles and make videos because I love doing so, but it’s mostly for you. I post articles for my readers and I edit videos for my viewers. I am so grateful to have you, so thank you very much for your support, it gives me a reason to wake up every day. I wish you the best, talk to you very soon !